People wonder why I talk about the upcoming blowout, the 2020 Election where Orange Man Bad will win going away, with such a margin that the ballot harvesting mail in fraud machine won't be able to keep up.

Regular people see things like this and they get angry.  You have to be a purple hair mouth breathing low status true believer to see this and not get angry.

Regular people will quietly say to themselves, 'F*** it. I've not been allowed to function like a normal person while twits like Dianne Feinstein are doing this sh1t."

And Lori Lightfoot does it.  And Bill DeBlasio.  And Nancy Pelosi.  And Chris Cuomo.  And every criticism-free BLM riot.  Do you see a pattern?  I do.

The regular people are not wrong, and they number in the millions.

Let me put it in perspective.  My hispanic nieces and sisters in law are all big DJT supporters. Re read that sentence.  The weren't always, but they're tired of being lectured to and then seeing this trainwreck of a hypocrite: ... Enjoy the debate - it's about an hour away!

This was on Zerohedge this morning, at the top, front and center: 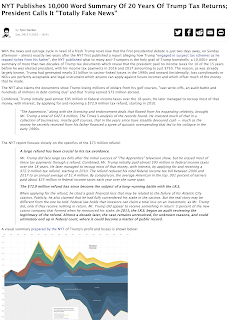 These people must really be in a bubble.  I can't think of anything more disconnected to reality than the paper formerly known as the New York Times.

The NYT comes out screaming that Trump lost money, got a huge return, used it to offset losses, and is an overall Bad Orange Man.  Naturally, there's no evidence he broke the law, which was the first thing I looked for.  Here's the best quote from the article, showing that the Junior Varsity has taken over the organization:

"And without a blockbuster "gotcha" that would confirm that Trump had violated the law, the NYT simply concludes by noting that "in the end the financial picture for Mr. Trump is fraught" and that "as he approaches one of the most consequential elections in American history — down in most polls, under I.R.S. audit and heavily in debt — his businesses may not be well equipped to navigate what lies ahead."
It gets better.  Michael Tracey saw the same thing I did: 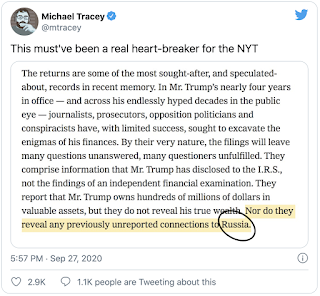 At this point, trolling the NY Times is almost too easy.  The reason why it will be a 2020 Trumpslide, besides the fact that they've telegraphed the Narrative of the Election: it won't be decided on election day, and "mail in ballots are good!" is voiced in the first comment ZH:
"Demand to see Pelosi, Schumer, McConnell, Graham, Romney, Harris, Biden etc tax returns...we know how Trump made his money how did they all get filthy rich as “public servants”??

That was the first thing I thought of as well.  All of the people listed above are multimillionaires.  There has been zero concern from the NYT about how they got rich as 'public servants'.  But they'll run a 10,000 word 'summary' of Trump's tax returns.  Now.  6 weeks before the election.
Trump's been in the public eye since the late 1970's.
It's only one reason why there will be a Trumpslide.  The NYT can't see it, because they have Trump Derangement Syndrome, but it shows the massive disconnect between the Coastal Elite Bubble and real people.  They have no idea what we think, or how.
Posted by TFT at 7:39 AM No comments:

These two are some brave souls.

Attention spans have been shrinking for decades.  Especially as reading becomes more unnecessary - the Human Animal is easier to control.  People like 12 second long Instagram Stories.  They're insanely popular.  The reason for that is that most people can't focus longer than 20 minutes.  If you're under 19 years old that number is probably 3 minutes.  Put a zany video up and talk about #WAP and you'll get more likes and attention than you can handle.

Hotep Jesus and Adam Curry talk in a raw way about race, culture, America, and politics.  They talk for 3 and a half hours.  Most people see the length and they tune out.  Curry and Hotep Jesus know this, they're both excellent marketers.

They don't care.  They go for it anyway.

You won't hear a conversation like this anywhere else.

If you have a 3 hour drive, put on your headphones on so the passengers in the car, and enjoy.

You would think that Americans would be furious that their state governments decided that a health 'emergency' gave them incredible powers to limit their freedoms.

Ironically, 18 years ago the W administration had a talking point that the Muslims in the Middle East "hated us for our freedoms".

But you can loot, pillage, steal, kill and 'protest' - one would think that regular people would fight back.

I will go to my grave wondering where the fighting American spirit went.

One judge has called a power hungry, mediocre politician to task.  The PA governor placed new  limits (25 people) for gatherings in the state.  Here's the problem.  He privately authorized a gathering this summer.  He was seen in at least 2 BLM protests - clearly violating his own rules.  He used sloppy bits of evidence to try to get his rules through.

Judge wasn't having it.  It's an epic beat down.  About damn time.

Clay Travis is one of the few people left who watches the NFL.

One of the more hysterical (funny and unhinged) things going on in the league is that coaches are getting fined for not wearing a mask.  Mind you, none of the players are wearing masks.  The players are pushing, shouting, grabbing, clinging and doing all of the high level, high powered physical things that always happen on a football field.

This is where we are now in stupid clown world.

Strange how a football helmet can block the Corona.  Whatever their agenda is, the people carrying it out are making it look foolish and illogical.  This isn't your grandfather's New World Order.

They Don't Believe Any of It

Dave Smith was talking on his podcast the other day how the politicians who are popping off about all this 'woke' bullshit don't believe any of it.  It was a good monologue.  He showed how what they say is never related to what they actually do.

The woke stupidity is simply the schmaltz they spread over the idiotic populace in order to pacify them as they know that no one takes a close look at what they do.

Here is another example of what Smith was talking about: 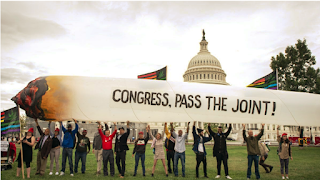 Loren, one of the posters at Michael Malice's Locals.com site, shared this with the group.  It is a textbook example of not only how things work, but what these people believe.  They don't believe anything, if you can see through the bull they constantly spew.
"Defund the Police!"  Remember that?
They won't even take marijuana off the schedule 1 list because the Cop Lobby doesn't want it that way.  The drug war is a big moneymaker for them.They 'lobby' congress (think: bribe) and so that's how it goes.
They're waiting until after the election.  What they're actually doing is just waiting, because they know the Narrative that you'll be fed will be something different, and the useful idiots will be screaming about it on Facebook and Twitter.
They know how the game is played.  They understand the uses of propaganda and the glaring intellectual limits of a Herd that's been schooled into oblivion.
Criminalizing Marijuana allows police to be violent with nonviolent people.
And you thought "Defund the Police" was serious.
Posted by Mr. D. Marolla at 9:05 AM No comments:

Jason Whitlock and Clay Travis have been making noise in the Sports Media world.

They are rejecting the WOKE nonsense that the corporate titans want us to ingest unthinkingly.  Whitlock has stated repeatedly that his religious background and his father were instrumental in his upbringing.  He's Fearless about using those bedrock principles as a shield against the nonsense that passes for 'activism' today.  I sent him these questions and requested an interview:

I am an English teacher in a rough neighborhood school and I would like to interview you for not only my own small platform, but for posterity and my students.

I am at Mt. Vernon High School in NY, right above the Bronx county line. Our basketball program is legendary. We’ve produced Ray and Gus Williams, Rodney McCray, and recently, Ben Gordon. We compete for the NY State Basketball title every year.

It is your educational and schooling path, about which you’ve spoken recently, that got me interested in speaking with you. Your in-depth biographical interview with Clay Travis was incredible in its detail. Your father’s teachings, your mother pulling you out of school and sending you to the suburban school seem to have been some of the key ingredients in your development. It is this early era of your life I’d like to discuss.

In focusing on school / education, I’d like to ask you these four questions to begin:


Mr. Whitlock, you represent a unique place in American society. People see you as some sort of knee jerk contrarian. I don’t. It is your consistency in holding to bedrock western culture / American principles that sets you apart. You haven’t changed, society has.

I’ve used some of your videos with my Public Speaking Class 12th graders to show them how to craft an argument. Even if we never are able to connect, I’m going to take the time here to thank you for not only helping me provide material that has helped young adults, but for the greater effect of showing others that you don’t have to bend to pressure. You can remain standing and continually speak and write about what you know is good and true, however unpopular it may be.

My writing is here. 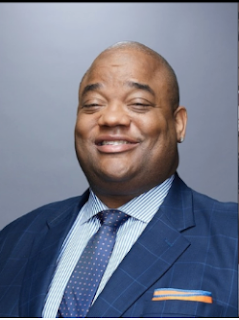